MALACCA: It was a close call for some students of the 184-year-old Malacca High School when the roof of its library came crashing down.

Although no injuries were reported during the incident early yesterday morning as the usually packed library is closed on weekends, there were students and teachers busy celebrating Canteen Day and attending the school’s Parents and Teachers Association meeting at the country’s second oldest school.

The incident is believed to have happened sometime between Friday night and before dawn yesterday and the damage was discovered at 8am by a general worker.

State education, science and technology committee chairman Datuk Yaakub Md Amin said the affected section of the building would be closed temporarily to allow the state public works department to assess the extent of damage and repair costs.

“We will seal off not only the library but also the teachers and staff rooms located within the same building.

“There is a danger the entire roof may collapse as the timber rafters are affected by wood rot due to termite infestation and moisture following the recent wet spell,” he said.

He added that signs of wood rot were spotted a day earlier by the school authorities who immediately alerted state education officials.

The school is more than 180 years old but the single-storey structure where the library is housed was constructed in the 1940s.

The last major renovation done to this section of the building was carried out in 1971, he said.

He said repairs would cost about RM100,000 and would be carried out during the school break in September to allow the library to be opened for the new session next year.

Meanwhile, state MCA chairman Datuk Gan Tian Loo, who was invited to open the school’s PTA meeting, said it was fortunate that no injuries were reported in the incident. 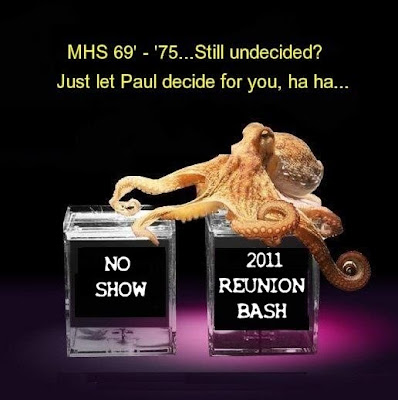 For classmates who have yet to decide whether to attend our MHS 2011 Reunion Bash on 12th. February 2011 at Aldy Hotel, Melaka, why not take the advice of Paul, the oracle octopus which predicted 100% World Cup matches. Paul selected Spain to be the Winner and he was right.

You do not have to predict whether you want to attend our Bash. Just send in your confirmation as soon as possible. Book your air tickets and schedule your visit. Advance confirmation can be sent via email to Secretary, MHS 75 Bash 2011 giving your name and number of persons. attending
Posted by TW Kang at 11:20 PM No comments:

In order for the Classmates of Malacca High School Classes of 1975 to carry out an active discussion group among friends, we have founded a MHS75 Classmates Forum.

Members who are from Classes of Malacca High School 1975 batch can log into this forum and join if you want to participate in creating Topics, discussion and exchange of information and comments.

Self-censorship will be the course of the day in this forum and all of the participants, being responsible netizens, should comply with intergrity.

The forum is hosted at : http://mhs75classmates.maxforum.org/

Webmaster
Posted by TW Kang at 11:18 PM No comments: